Scientists from the Goethe University Frankfurt, EMBL and the University of Zurich explain skin fusion at a molecular level and pinpoint the specific molecules that do the job in their latest publication in the journal Nature Cell Biology. 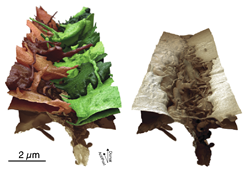 Figure legend: Perspective view of the zipping area with 17 skin cells "zipping". Left: Membranes are colored in shades of brown and green to discriminate individual skin cells coming from the left or the right. The cells expand various types of protrusions in all directions to find their opposite partner. Right: If the skin cells are computationally removed the shaping of the cells underneath is visualized, with the sealing of the skin visible in the back.


In order to prevent death by bleeding or infection, every wound (skin opening) must close at some point. The events leading to skin closure had been unclear for many years. Eltsov and colleagues used fruit fly embryos as a model system to understand this process. Similarly to humans, fruit fly embryos at some point in their development have a large opening in the skin on their back that must fuse. This process is called zipping, because two sides of the skin are fastened in a way that resembles a zipper that joins two sides of a jacket.

The scientists have used a top-of-the-range electron microscope to study exactly how this zipping of the skin works. “Our electron microscope allows us to distinguish the molecular components in the cell that act like small machines to fuse the skin. When we look at it from a distance, it appears as if skin cells simply fuse to each other, but if we zoom in, it becomes clear that membranes, large protein complexes and other cellular components are involved".

“In order to visualize this orchestra of healing, a very high-resolution picture of the process is needed. For this purpose we have recorded an enormous amount of data that surpasses all previous studies of this kind”, says Mikhail Eltsov.

As a first step, as the scientists discovered, cells find their opposing partner by “sniffing” each other out. As a next step, once cells have decided with which other cells they want to merge, they develop adherens junctions, which act like a kind of molecular Velcro. This way they become strongly attached to their opposing partner cell. The biggest revelation of this study was that small tubes in the cell, called microtubules, attach to this molecular Velcro and then deploy a so-called “self-catastrophe”, which results in the skin being pulled towards the opening and then closes as if one pulls a blanket over oneself.

Damian Brunner, who led the team at the University of Zurich, has performed many genetic manipulations to identify the correct components. The scientists were astonished to find that microtubules involved in cell-division are the primary scaffold used for zipping, indicating a mechanism conserved during evolution.

“What was also amazing was the tremendous plasticity of the membranes in this process allowing the closing of the skin opening in a very short space of time. When five to ten cells have found their respective neighbours, the skin already appears normal”, says Achilleas Frangakis from the Goethe University Frankfurt, who led the study.

The scientists hope that their results will open new avenues into the understanding of epithelial plasticity and wound healing. They are also investigating the detailed structural organization of the adherens junctions, work for which they were awarded an ERC starting grant.