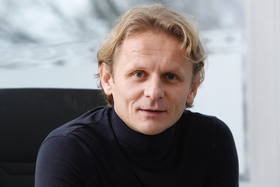 Research in the Dikic group is centered around two major cellular quality control pathways: the ubiquitin system and autophagy. As such they provide protection against various human diseases and are involved in almost all cellular signaling processes. The group covers a wide range of expertise to reveal structure-function relationships. Recently, the Dikic group revealed a novel ubiquitination mechanism induced by bacterial enzymes upon infection of human cells. In collaboration with colleagues at the MPI of Biophysics, the group now aims to resolve additional atomic details of this serine ubiquitination. A second area of mutual interest is in remodeling of endoplasmic reticulum via a process known as ER-phagy. Until now, very little is known about the mechanisms facilitating membrane targeting, bending and shaping during this selective form of autophagy.

In addition, Ivan aims to also build strong links between colleagues at the MPI of Biophysics and the highly competitive cancer research program at Goethe University. He is one of the founders of the Frankfurt Cancer Institute (FCI), which has recently received significant funding for building up a LOEWE center and a new research building.

Link to press release of the Max Planck Institute of Biophysics