How do bacteria build up natural products?

7 July 2020. The active agents of many drugs are natural products, so called because often only microorganisms are able to produce the complex structures. Similar to the production line in a factory, large enzyme complexes put these active agent molecules together. A team of scientists from Goethe University Frankfurt and Technical University of Munich has now succeeded in investigating the basic mechanisms of one of these molecular factories.

Many important drugs such as antibiotics or active agents against cancer are natural products which are produced by microorganisms such as for example bacteria and fungi. In the laboratory, these natural products can often not be produced at all or only with great effort. The starting point of a large number of such compounds are polyketides, which are carbon chains where every second atom has a double bound to an oxygen atom.

In the cell of a microorganism, such as the bacterium Photorhabdus luminescens, these compounds are produced with the help of polyketide synthases (PKS). In PKSof type II, as a first stage four proteins work together as alternating “teams".

In the second stage, they are then modified by further enzymes to the desired natural product. Examples of bacterial natural products which are produced this way include for example the tetracyclin antibiotics used in hospitals as well as the anti-cancer drug doxorubicin.

While the modifying steps of the second stage have been well studied for many active agents, there was little known about the basic functioning of the first stage, when the highly reactive polyketide intermediate product is bound to the enzyme complex and protected so that it cannot react spontaneously. 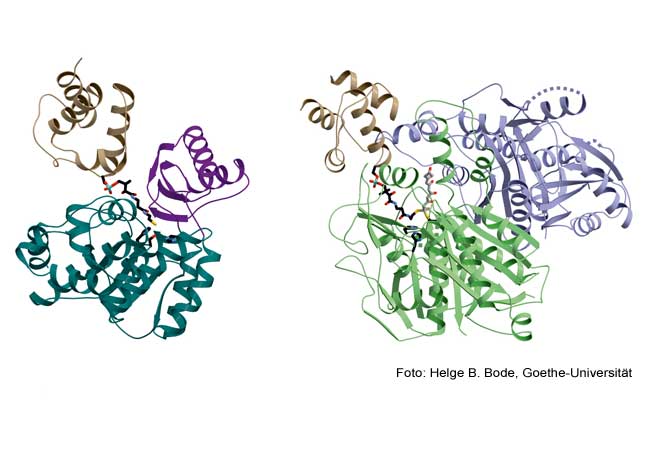 This gap has now been closed by the joint work of the groups of Helge Bode from Goethe University Frankfurt and Michael Groll from Technical University of Munich, who published their results in the renowned scientific journal Nature Chemistry (Link).

“In the context of this work, we were for the first time able to analyze complexes of the different partner proteins of type II polyketide synthase type II with the help of X-ray structure analysis and now understand the complete catalytic cycle in detail," Michael Groll explains.

“Based on these findings, it will be possible in the future to manipulate the central biochemical processes in a targeted manner and thus change the basic structures instead of being restricted to the decorating enzymes," Helge Bode adds.

Although it is still a long way to improved antibiotics and other drugs, both groups are optimistic that now also the structure and the mechanism of the remaining missing parts of the molecular factory will be explained. “We already have promising data of the further protein complexes," says Maximilian Schmalhofer, who was involved in the study as a doctoral candidate in Munich.

The work was supported with funds of the LOEWE focus MegaSyn of the State of Hesse and the Deutsche Forschungsgemeinschaft (DFG) in the context of SPP 1617, SFB 1035 and the Center for Integrated Protein Science Munich (CIPSM) cluster of excellence. X-ray structure data were measured at the Paul Scherrer Institute in Villigen (Switzerland). The Swedish National Infrastructure for Computing provided computing time for the theoretical modeling.