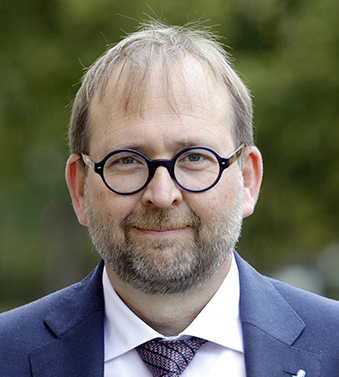 9 July 2020. Enrico Schleiff, Professor of Molecular Cell Biology of Plants, was elected President of Goethe University Frankfurt by the extended Senate on Wednesday 8 July. The term of office is six years and will begin on 1 January 2021.

Enrico Schleiff has been a professor at Goethe University Frankfurt since 2007 and was BMLS Director from 2014-2019. He is Chairman of the Board of the Frankfurt Institute for Advanced Sciences (FIAS) and heads the RMU-LOEWE focus "DynaMem". From April 2012 to March 2018, Enrico Schleiff was Vice President of Goethe University Frankfurt with responsibility for young researchers, gender equality and academic infrastructure. He was vice-speaker of the Cluster of Excellence "Macromolecular Complexes" and headed the International Training Network "SPOT-ITN" from 2012-2017. He is also the Deputy Chairman of the university association UniWiND since 2013.

Enrico Schleiff said "I am very pleased with the election and thank the Enlarged Senate for the trust it has placed in me” and “I will do my utmost to constructively overcome the tensions that have arisen in the university in recent weeks. In doing so, I can also build on my six years of experience as Vice President of the Goethe University. I invite all members of our Goethe University to work together. Only together can we achieve our ambitious goals in teaching and research".