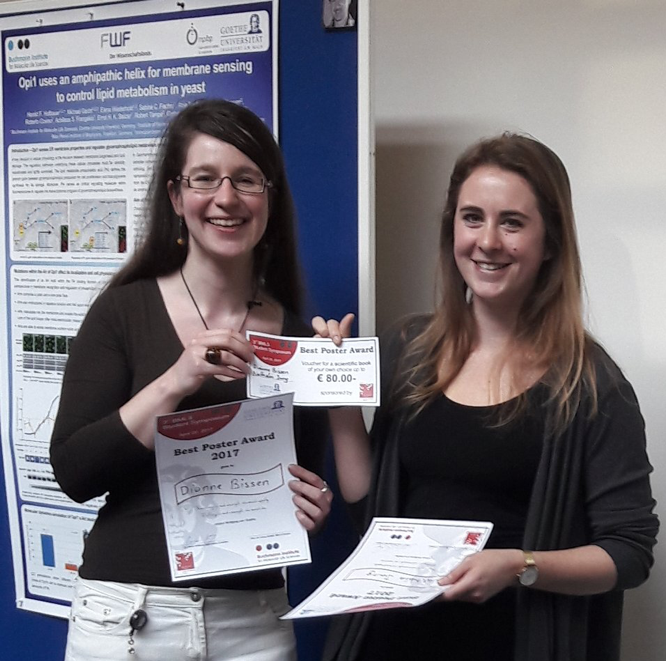 April 2017. On 20th of April 2017, BMLS students gathered at the 3rd BMLS Student Symposium. This was the third year in a row BMLS students organized a symposium only for students (PhD students, Master and Bachelor students) and post-docs, giving the opportunity to practice conference-like situations, such as giving a scientific talk or having a poster presentation, but also engaging in networking and scientific discussions.

In the first part of the symposium five talks were given by PhD students and post-docs from several groups. The Windbergs group, which joined the BMLS earlier this year had its debut with two refreshing talks about matrix engineering. The sixth talk was held by our guest, Dr. Martina Rembold, scientific editor at EMBO reports. She illustrated the work as an editor, the concept of EMBO and gave advice for submitting manuscripts.
The second part of the symposium began with a poster flash presentation, where the nine poster authors announced and presented their posters in 1 minute to the audience. This was followed by the poster session, participating also the BMLS research group leaders and the BMLS Director Enrico Schleiff. At the end of this event, a prize (kindly donated by BMLS and CEF) for the best talk was awarded to Viktoria Planz (Windbergs group) and her talk “Bio-adaptive hybrid fibers for hierarchical 3D cultivation of human skin cells”. Two poster won the poster award: Nathalie Jung (Windbergs group) and Dianne Bissen (Acker-Palmer group). More than 50 participants contributed to this successful event. The day ended with scientific networking in a relaxed atmosphere with music, food and drinks. We are looking forward for the next symposium!

Congratulations to the winners of the “best talk” and “best poster” of the 3rd BMLS Students Symposium!