Optogenetics, synaptic transmission and neuronal networks in Caenorhabditis elegans
We study nervous-system function in the nematode Caenorhabditis elegans, a genetically amenable animal model. We study: 1) Mechanisms of transmission at chemical synapses, and 2) function of single neurons within the small neuronal network of C. elegans (just 302 neurons), in the context of generating behaviour. We developed or established a number of crucial methodologies:
Optogenetic manipulation of neuronal function and synaptic transmission. In 2005, we pioneered the use of the light-activated cation-channel Channelrhodopsin-2 in a living animal. This allows us to non-invasively stimulate any neuron of interest in the transparent worm using blue light. In 2007 we were first to apply the yellow-light driven chloride pump Halorhodopsin, to inactivate neurons in a live animal. (Both in cooperation with Prof. Bamberg, MPI for Biophysics, Frankfurt)

We use optogenetic tools to study neuronal circuits, and we combine their use with automated, quantitative analysis of worm behaviour to study the function of individual neurons. In addition, optogenetics largely facilitate our analyses of synaptic transmission. Additional optogenetic tools we use are variants of Channelrhodopsin with new properties and a photo-activated adenylate cyclase to photo-manipulate cAMP levels.

Biochemical purification and mass spectrometry of neuronal protein complexes (or organelles) allows us to identify unknow proteins acting in synaptic transmission. Electrophysiology at the neuromuscular junction (NMJ) is crucial to properly analyze chemical synaptic transmission. Despite the small size of C. elegans (1000 x 80 µm), the NMJ can be prepared by dissection in a functional manner. We combine electrophysiology and optogenetics, as optical stimuli are precise and non-invasive triggers of transmitter release.

Cell-surface immunostaining of proteins in live animals. This method involves injecting antibodies into the body cavity of C. elegans, to analyze expression of plasma membrane proteins and their proper trafficking to the cell surface, or their anchoring at synapses. 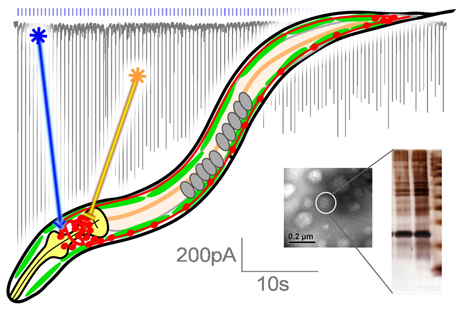