Since they are physiologically more relevant, multicellular spheroids are popular models in tissue engineering as well as drug development and toxicological tests [1]. In spite of these numerous applications of a fully formed spheroid, relatively little is known about the details of its formation. Various techniques for spheroid formation have been established of which almost all are based on the same principle (reviewed in [2]): The cells are cultured in a convex non-adhesive environment, in which they cluster due to gravity and then aggregate. Findings that E-Cadherin expression correlates with spheroid formation capacity [3], suggests that intercellular adhesion plays a key role in spheroid formation.

In this project we investigate how fundamental physical properties of the cell, primarily intercellular adhesion, contribute to the formation of cellular spheroids and the maintenance of the structure. To this end we apply a highly interdisciplinary approach combining cell biology, advanced microscopy, image analysis and mathematical modelling.

Different phases of spheroid formation. Snapshots of a 72 h time lapse of approximately 150 breast cancer cells (T-47D) in a round bottom well, recorded with a Zeiss Cell Observer and a 10x objective by Nariman Ansari. Scale bar: 50 µm. A: Individual cells and smaller cluster come together and aggregate into a flat discoid. B: The discoid folds up. C: The cells form one three dimensional cluster. D: The cluster rounds up, becomes more compact and the cells form a basal membrane.

People involved in this project:

Undesired cytotoxic effects of many cancer drug candidates are mostly recognized quite late during the clinical trials. Just one out of ten drug candidates entering phase I trials reaches the market. This low success rate drives the high development costs and the prices of successfully marketed drugs. New assays predicting the efficacy of drugs in the early, pre-clinical stage are required to increase the success rate in drug development. Modern assays are performed with three-dimensional cell cultures. Three-dimensional cultures essentially avoid hard and flat surfaces. Hence, they favor less constrained physiological sample dynamics and promote cells growth in tissue-like environments. The effect of a drug can be investigated in an environment similar to the target tissue. This improves the reliability and the physiological significance of the assay. 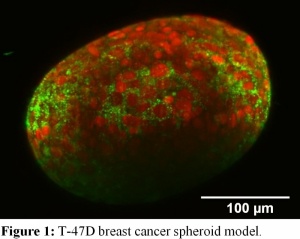 We develop three-dimensional cultures of tumor cell spheroids (Figure 1) for drug screening. The cultivated tumor spheroids serve as a model for tumors in the living organism. We evaluate the therapeutic benefits as well as the toxicity of drug candidates in the spheroids by means of light sheet based fluorescence microscopy. We develop a fluorescence imaging workstation for three-dimensional cultures based on LSFM, the Tissue-Culture LSFM (TC-LSFM). TC-LSFM allows dynamic long-term observations of living three-dimensional cultures (Figure 2). Cell viability is ensured over several days by a special perfusion chamber featuring a tight control of temperature, medium flow, pH, and gas exchange.
The research activities are also expected to promote novel scientific approaches in modern 3D cell biology like tissue homeostasis and development, epigenetics, stem cell research, nutrient flow and oxygenation, particularly genetic noise. 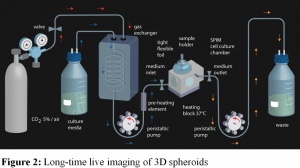 All references are found via: http://www.3dcellculture.com/

Specimens scatter and absorb light, thus, the delivery of the probing light and the collection of the signal light become inefficient; many endogenous biochemical compounds also absorb light and suffer degradation of some sort (photo-toxicity), which induces malfunction of a specimen. In conventional and confocal fluorescence microscopy, whenever a single plane is observed, the entire specimen is illuminated (Verveer 2007). Recording stacks of images along the optical z-axis thus illuminates the entire specimen once for each plane. Hence, cells are illuminated 10-20 and fish embryos 100-300 times more often than they are observed (Keller 2008). This can be avoided by using light sheets, which are fed into the specimen from the side and overlap with the focal plane of a wide-field fluorescence microscope. In contrast to an epi-fluorescence arrangement, such an azimuthal fluorescence arrangement uses two independently operated lenses for illumination and detection (Stelzer 1994; Huisken 2004).

Optical sectioning and no photo-toxic damage or photo-bleaching outside a small volume close to the focal plane are intrinsic properties. Light sheet-based fluorescence microscopy (LSFM) takes advantage of modern camera technologies. LSFM can be operated with laser cutters (e.g. Colombelli 2009) and in fluorescence correlation spectroscopy (FCS, Wohland 2010). We have also successfully evaluated the application of structured illumination in a SPIM (Breuninger et al., 2007). Christoph Engelbrecht investigated the performance of our SPIMs (Engelbrecht & Stelzer, 2006) both theoretically and practically. We also designed and implemented a wide field frequency domain Fluorescence Lifetime Imaging (FLIM) setup, which is based on a SPIM. This arrangement provides an inherent optical sectioning capability and reduces photo bleaching compared to conventional wide field and confocal fluorescence microscopes. Most recently, we implemented incoherent structured illumination in our DSLM (Keller 2010). The intensity modulated light sheets can be generated with dynamic frequencies and allow us to estimate the effect of the specimen on the image formation process at various depths in objects of different age.

The single plane illumination microscope (SPIM) employs a cylindrical lens to generate a light sheet. A collimated laser beam is focused into the plane of the detection lens along one direction while the other direction remains collimated (Greger et al., 2007). While this approach is relatively simple and straightforward it suffered from the low quality of the cylindrical lens and the inefficiency of the illumination system (Breuninger et al., 2007). The major advantage of the digital scanned laser light sheet-based fluorescence microscope (DSLM; Keller et al., 2008) is that it relies entirely on cylindrically symmetric optics and hence provides a very good optical quality. In addition, the DSLM employs a minimal number of optical components and does not suffer from excessive wave front aberrations. 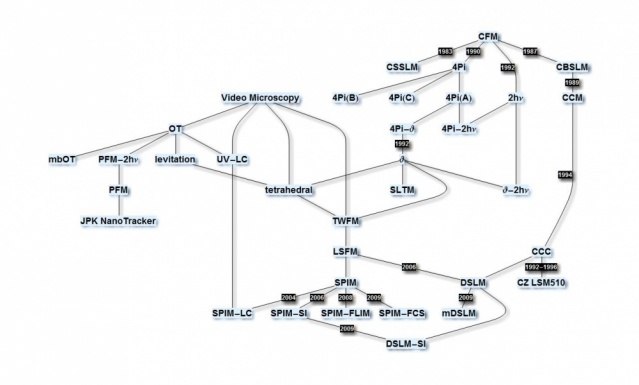 The development of LSFM at EMBL draws on many previous developments. In particular confocal theta fluorescence microscopy, which was originally developed together with Steffen Lindek, played a very important role. About a dozen papers on theta microscopy describe its properties and that of LSFM (single & two-photon, annular/Bessel beams, (a)symmetric arrangements, …) theoretically as well as practically.
All references are found via: http://www.researcherid.com/rid/A-7648-2011.