A molecular 'gear shift' in the nervous system 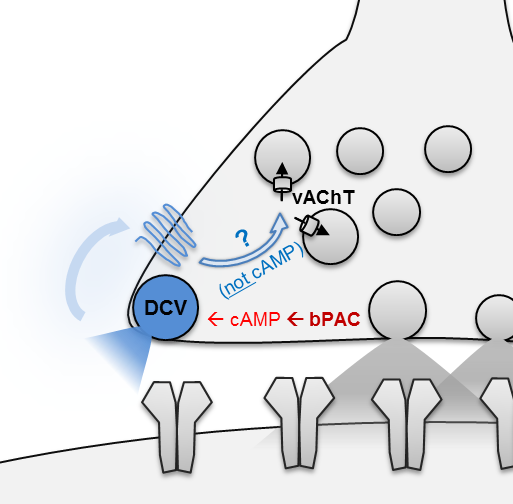 February 2017. Nerve cells communicate via chemical messengers, so-called neurotransmitters (e.g., acetylcholine), which enable a rapid and directed transmission of information. Other messengers used in the nervous system are neurohormones and neuropeptides, which have modulatory functions. The release of such messengers occurs at contact points between neurons, so-called synapses.

Neurons can regulate their activity and thus the release of neurotransmitters. These are stored in the neuron in synaptic vesicles, small membranous ‘bubbles’. Electrical activation of the neuron leads to fusion of the vesicles with the outer envelope of the neuron, and thus to release of the transmitters. This usually occurs in discrete quantities, determined by the volume and the filling state of the vesicles. Neurons can fuse vesicles at a lower or higher rate, thus releasing more or less quanta of transmitter per time - a molecular ‘gas pedal’ of the neuron. However, it could also be useful to alter the filling state of the vesicles, e.g. adapted to certain situations which require a stronger neural activity. To remain in the above analogy, this could be interpreted as a 'gear shift': with the same amount of gas, a higher speed can be achieved in a higher gear. Researchers around Alexander Gottschalk at the Buchmann Institute for Molecular Life Sciences at the Goethe University have now discovered such a 'gear shift of neurotransmission' (Current Biology, February 2, 2017, online: http://dx.doi.org/10.1016/j.cub.2016.12.055).

They found that a molecular signal within the neuron leads to an increased neurotransmission. They could generate this signal, cyclic AMP (cAMP), in the motor neurons of a roundworm, Caenorhabditis elegans, by optogenetic methods: a light-activated enzyme, which can form cAMP, is specifically introduced into the motor neurons of the worm (by 'genetics' methods). This enzyme is then stimulated by light ('opto'): The animals began to move faster. By electron microscopy, the researchers were able to demonstrate that fusion of synaptic vesicles was stimulated in the neurons, but that also the size of the synaptic vesicles increased. This was associated with an electrophysiologically measurable increase in the transmitter 'quanta', i.e. the filling state of the vesicles had increased within a few seconds, which led to the increased movement of the animals when the vesicles were released. The group was further able to determine that this acute 'extra filling' of the vesicles is triggered by neuropeptides, which are emitted by the optogenetically stimulated neurons in order to increase their 'gear switching'.

This work may have revealed a new mechanism for the control of neurotransmission, not only in the locomotion nervous system of worms, but also in vertebrates or even in humans. Neuropeptides are found in the motor neurons of higher animals - but their function has thus far not been fully understood. The Gottschalk group is now investigating whether the mechanism also applies in zebrafish, a simple vertebrate animal model.