The sleep neuron in C. elegans is also a stop neuron

September 2019. The nervous system of the threadworm C. elegans is simple at first sight: it consists of 302 neurons, some of which, however, have several functions. The neuron “RIS”, known as a sleep neuron, can therefore put the worm into a long sleep – or also just briefly stop its locomotion, as a group of scientists led by Goethe University have now discovered.

Wagner Steuer Costa in the team of Alexander Gottschalk, Professor for Molecular Cell Biology and Neurobiochemistry, discovered the sleep neuron RIS a few years ago by coincidence – simultaneously with other groups. To understand the function of individual neurons in the plexus, the researchers use genetic engineering to cause them to produce light-sensitive proteins. With these “photo-switches”, the neurons can be activated or turned off in the transparent worm using light radiation of a certain wavelength. “When we saw that the worm froze when this neuron was stimulated by light, we were quite amazed. It was the beginning of a study that took several years,” Gottschalk recalls.

The RIS neuron puts C. elegans to sleep when it is active for minutes or hours – for example after the shedding of the cuticle (a secreted form of skin) that is a process in the animal’s development. It also sleeps in order to recover after experiencing cellular stress. On the other hand, the neuron serves to stop the worm during locomotion – for example, if it wants to change direction or to avoid danger. The neuron then slows down the animal’s motion so that it has time to decide if it wants to continue crawling. In this case the neuron is only active for a few seconds. “Such stop neurons have only recently been discovered. This is the first one of its kind in a worm,” explains Gottschalk.

Interestingly, the axon of the RIS neuron is apparently branched, with the two branches having different functions, so that RIS not only slows motions but can also introduce backwards motion. This is reported by Gottschalk and his collaboration partners, Ernst Stelzer from Goethe University and Sabine Fischer from the University of Würzburg, researchers from the American Vanderbilt University in Nashville and KU Leuven in the current issue of Nature Communications. 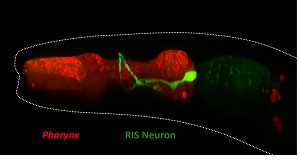 “We think that neurons with a double function exist in numerous simple life forms such as the worm. In the course of evolution they were then assigned to two different systems in the brain and further developed,” says Gottschalk. It’s a theme that will certainly be found to recur once other nerve cells of the worm are better understood. “The nervous system of C. elegans can be viewed as a kind of evolutionary test bed. If it works there, it will be used again and further refined in more complex animals.”

The discovery of the double function of RIS is also an example of how a permanently connected neuronal network can be additionally operated by a “wireless” network of neuropeptides and neuromodulators. This enables several functional networks to be realised on a single anatomical network, enormously increasing the functionality of the worm’s brain, as well as being very economical. “It should no longer be said that worm neurons are simple. Often, they can do more than mammalian neurons,” says Gottschalk.