19 June 2020. Mycoplasma genitalium is a human pathogen adhering to host target epithelial cells and causing urethritis, cervicitis and pelvic inflammatory disease. Essential for infectivity is its transmembrane adhesion complex called Nap. A team of scientists from the Buchmann Institute for Molecular Life Sciences, the Instituto de Biología Molecular de Barcelona and the Universitat Autònoma de Barcelona investigated the structure and mechanism of the Nap adhesion complex and revealed an intricate interplay between its components. A detailed understanding of the structure and adhesion mechanism of Nap will facilitate the development of anti-adherence therapies.

Nap is formed by two heterodimers, each consisting of proteins P110 and P140. The team reports the crystal structure of P140 both alone and in complex with the N-terminal domain of P110 as well as cryo-electron microscopy (cryo-EM) and tomography (cryo-ET) structures of Nap. The crystal structures and the cryo-EM structure were in a closed conformation, where the sialic acid binding site in P110 is occluded. By contrast, the cryo-ET structure showed an open conformation, where the binding site is accessible. Their structural information, in combination with functional studies, suggests a mechanism for attachment and release of M. genitalium to and from the host cell receptor, in which Nap conformations alternate to sustain motility and guarantee infectivity. 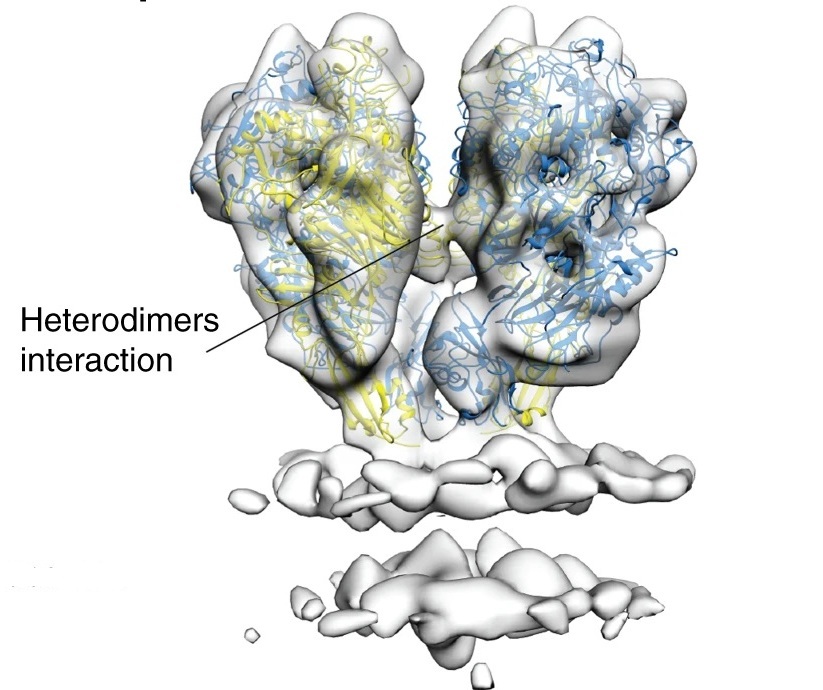 Figure legend: Cryo-ET map of the Nap adhesion complex with the structures of P140 and P110. The membrane bilayer of the mycoplasma cell is clearly defined in the lower part. The lateral view along the loose interface shows an interaction between heterodimers (Aparicio et al. Nat. Comm. 11, 2877). Further information ...