4 February 2022 Transforming Growth Factor beta (TGF-β) is a signalling protein whose dysregulation can cause developmental disorders and cancer. Dr Xinlai Cheng and his colleagues at the Goethe University Frankfurt have discovered how a tumour suppressor known as pVHL influences signal transmission involving TGF-β. Their findings suggest possible starting points for developing new drugs.

Signal transmission inside cells is a complex process. TGF-β, for example, regulates many cell functions during the early development of both humans and animals, but also in adult organisms. The mechanisms involved are not yet fully understood. It is, however, clear that activated TGF-β initially binds to receptors located on the cell surface. Inside the cell, the TGF-β receptors in their turn activate a protein called SMAD3, which then forms complexes with SMAD4 that translocate to the cell nucleus. There the SMAD proteins mediate the extent to which genes are activated and translated into proteins and other gene products.

Researchers at the Goethe University Frankfurt, Heidelberg University, the German Cancer Research Center (DKFZ), Heidelberg University Hospital and the University Hospital in Jena have now discovered how the von Hippel-Lindau tumour suppressor protein (pVHL) intervenes in this signalling pathway. Tumour suppressors are proteins whose defects or reduced presence in multicellular organisms are associated with a high risk that cells will degenerate into tumour cells. In the Journal of Cell Biology the scientists report the first evidence that pVHL degrades the SMAD3 protein. This occurs before SMAD3 and SMAD4 associate. pVHL thus inhibits the signalling chain that starts with activated TGF-β. “We obtained evidence of this both in cultures of human cells and in Drosophila,” says the last author, Dr Xinlai Cheng. “This suggests that at a very early stage in evolution pVHL assumed the regulatory function that we have now brought to light.” 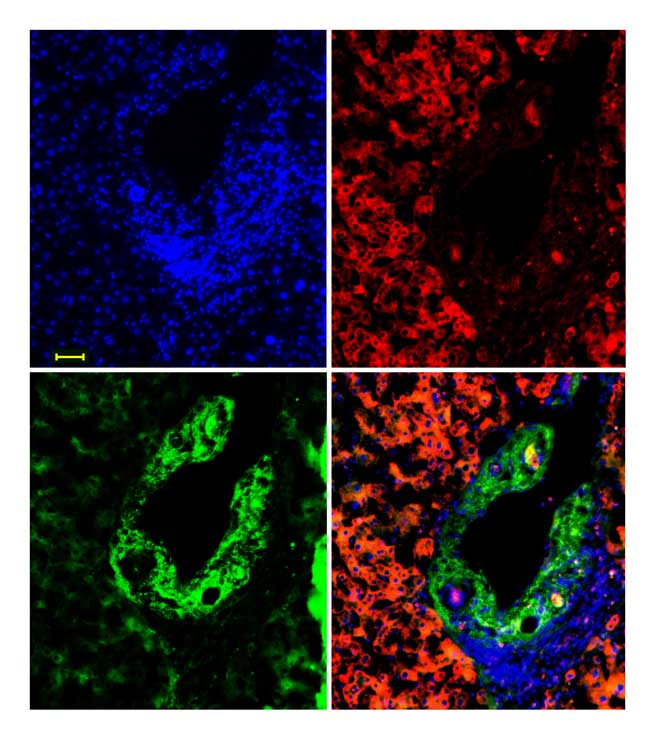 Figuer 1: Stained liver tissue shows the complementary occurrence of pVHL and SMAD proteins: Where pVHL (green) is abundant, SMAD2/3 (red) is scarce, and vice versa. Cell nuclei are stained blue. The lower right picture shows all three colours combined. Photos: Xinglai Cheng/Goethe University Xinlai Cheng has been leading a junior research group at the Buchmann Institute for Molecular Life Sciences at the Goethe University Frankfurt since 2019. He began the investigations at the Institute of Pharmacy and Molecular Biotechnology at Heidelberg University. His mentor, Professor Stefan Wölfl, explained an important finding that emerged from the new-found connection between pVHL and the TGF-β signalling pathway: “pVHL is known to be involved in how cells ‘feel’ oxygen and react to varying oxygen availability. As a result, a cell’s oxygen supply also mediates TGF-β signal transmission.”

The researchers’ discovery opens up new opportunities for developing drugs to combat cancer. “If we could, for example, use a substance to specifically regulate pVHL activity, we would also influence the TGF-β signalling pathway, which in turn plays a major role in the formation of tumours, and metastases in particular,” says Xinlai Cheng. Tumour cells are good at adapting to their environment inside the organism and to variations in oxygen availability. Their very flexible cellular activity helps them to do so. This activity is regulated by factors including the TGF-β signalling pathway.