A newly synthesized protein is as fragile as a newborn baby. It could never fold into its correct three dimensional structure if it would not be protected by chaperones. In case of membrane proteins chaperones do not only prevent their aggregation, but also escort them to their destination and aid in membrane insertion. For the so called family of "tail-anchored" (TA) proteins, which are secured in the membrane via a single helix, an interdisciplinary research team now managed to decipher the underlying molecular mechanism by combining X-Ray Crystallography and NMR-Spectroscopy with biochemical and cell-biological studies.

The group of FMLS deputy director Volker Dötsch contributed by showing that the central chaperon of the responsible protein complex, called Get3, regulates both binding to TA proteins within the cytosol and their release at the membrane. The two receptor proteins Get1 and Get2 aid in TA protein insertion. They use overlapping interfaces for the interaction with Get3. On the basis of different crystal structures the researchers suggest a model for the mechanism of how TA proteins are inserted into the membrane. Upon interaction with its membrane receptor the Get3 dimer gradually opens up to allow for the controlled TA protein insertion. "Those results are particularly important because they enabled us to establish the first model of the receptor-assisted membrane insertion of TA proteins that will now be the basis for further studies" comments Dötsch.

Link to full article, to German or English press release. 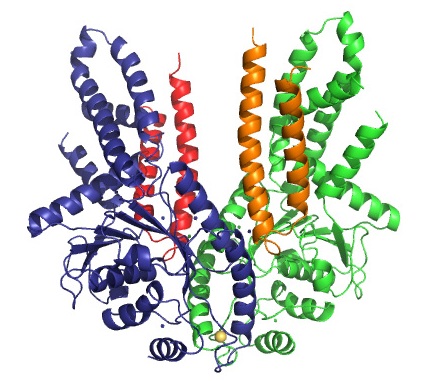 Crystal structure of the complex of Get3 and Get1 solved in this study. The two Get3 monomers that form the functional dimer are shown in green and in blue. Each monomer binds one Get1 molecule which are displayed in red and in orange. Get1 binds in the cleft between both Get3 monomers and initiates a conformational change that leads to a more open structure. This opening is a prerequisite for the release from Get3 and insertion into the membrane of the tail-anchored protein.