Projects in Neuro and Vascular Guidance

Tip cell structures resemble growth cones and emerging evidence suggests that axonal growth cones and capillary tip cells might use common repulsive and attractive signals in their environment that ultimately determine their directional navigation through the body, including tumor attractive signals. We have elucidated the mechanisms by which ephrinB2 ligands directly modulate the guidance of tip cells in the process of angiogenesis both during development as well as during tumor growth. EphrinB2 signaling involving PDZ-interactions regulates tip cell guidance to control angiogenic sprouting and branching in mouse retina and tumour angiogenesis (Sawamiphak et al., 2010). Mechanistically, ephrinB2 signaling induces the extension of filopodia by regulating the internalization of VEGFR2 in endothelial cells. The direct regulation of VEGFR2 function by ephrinB ligands represents an exciting and attractive alternative or combinatorial anti-angiogenic therapy target for tumour treatment. We are now studying the angiogenic function of other neuronal key regulators and their components in order to gain new insights on tumor development, vascular remodeling and angiogenesis related diseases. In addition, we are interested on the mechanisms of resistance to anti-angiogenesis therapy and have concentrated our studies in understanding at the molecular level the induction of invasion and metastasis following anti-VEGF therapy. 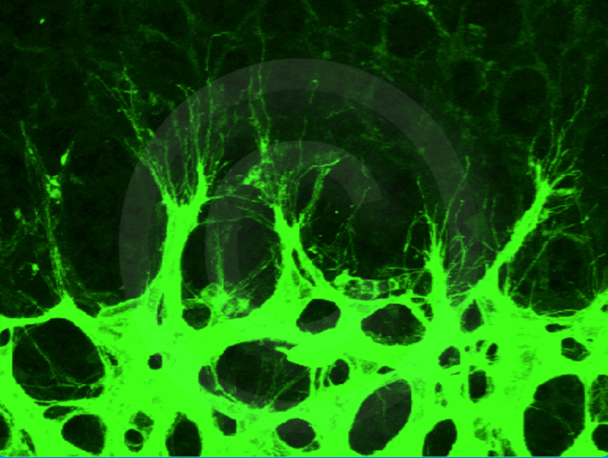 Tip cells extend filopodia protrusions to sense the environment at the vascular front of a developing mouse retina (P7). 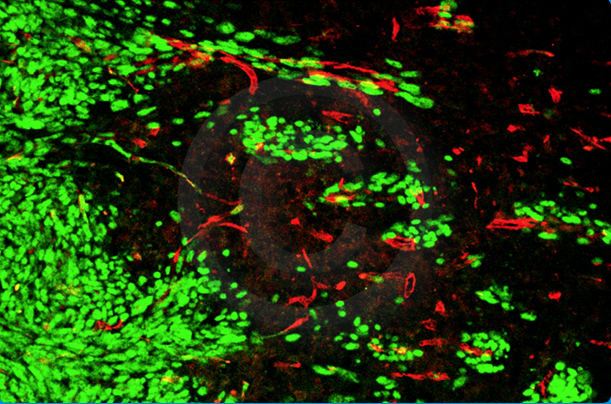 The function of vascular receptors in nervous system development and plasticity

On the gross anatomical level, both nervous and vascular systems build up a dense and highly branched network and even on the cellular level they develop similar structures. Recent research elucidated new roles of vascular guidance molecules and their receptors in neuronal development. VEGF and its receptors, originally described as key regulators of angiogenesis, are proposed to play a role in the nervous system. We are studying the function of the VEGFR2 in nervous system development and plasticity. We concentrate in different aspects of nervous system development such as neuronal migration, dentritogenesis and synaptogenesis. We are also concentrated in studying the function of VEGFR2 during plasticity phenomena in the adulthood including behavior and neuropsychiatric disorders. Further, we are also investigating the crosstalk between VEGFR2 and ephrinB2 in the nervous system. 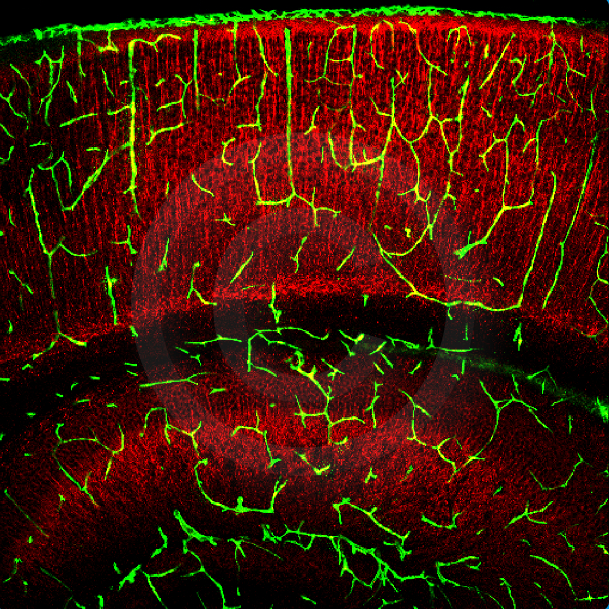 Vessels in the P5 wildtype cortex after Dextran perfusion (green) and MAP2 staining in red.

The dendritic tree is the main site of information input for neurons and influences neuronal function. Proteins involved in synaptic transmission and plasticity, as well as lipids required for outgrowth and remodelling of dendrites and axons are transported along the neuronal secretory pathway. To unravel the molecular mechanisms of dendritic arborization is the main goal of this project. We specifically focus on the role of the PDZ domain containing glutamate receptor interacting protein 1 (GRIP1) as one of important regulators of AMPA receptor stability at the synapse (Essmann et al., 2008) and of the secretory pathway to deliver cargo proteins to dendrites and synapses. This project is part of the CRC 1080 "Molecular and Cellular Mechanisms of Neural Homeostasis". 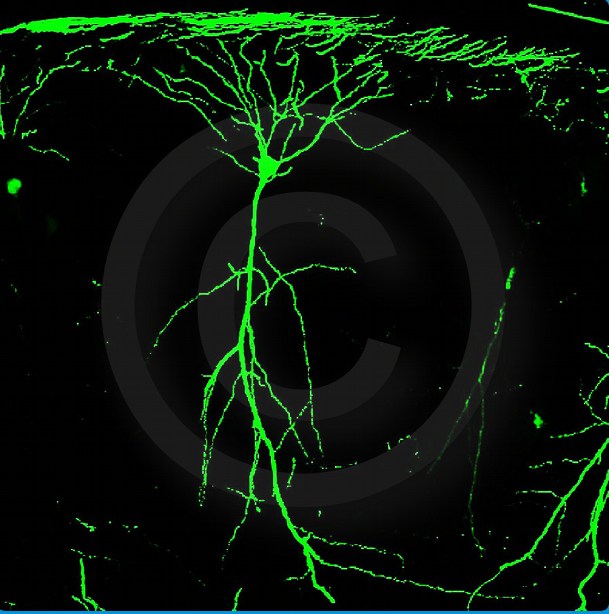 The neurovascular connection on developmental processes and disease

The original requirement for an organism to both sense its environment and broadly distribute nutrients throughout its body has driven to the evolution of the nervous and the vascular system, respectively. Both systems form complex hierarchically branched networks that require guidance to ensure their proper positioning in the body. Blood vessels and nerves are structurally similar at anatomical and cellular level and they are often aligned, following parallel routes to achieve a highly stereotypical patterning. The alignment of vessels and nerves most probably reflects that both systems are codependent and they mutually influence each other. In our project we want to investigate how nerves and vessels do crosstalk and we aim to elucidate which is their reciprocal requirement to form functional networks. We are analyzing the impact of a vascular compromised environment on neuronal function, and vice versa, which vascular defects we can associate to a neuronal deficient background. We are focusing our studies in neuronal plasticity, neurocortical development, cerebral vasculogenesis and blood brain barrier permeability. 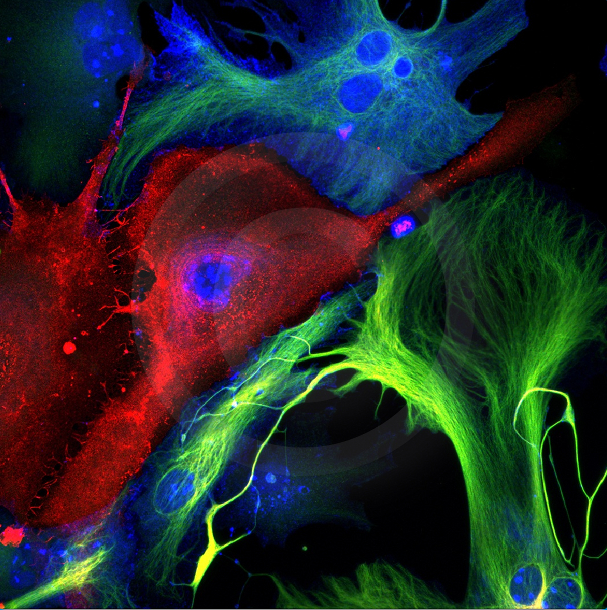 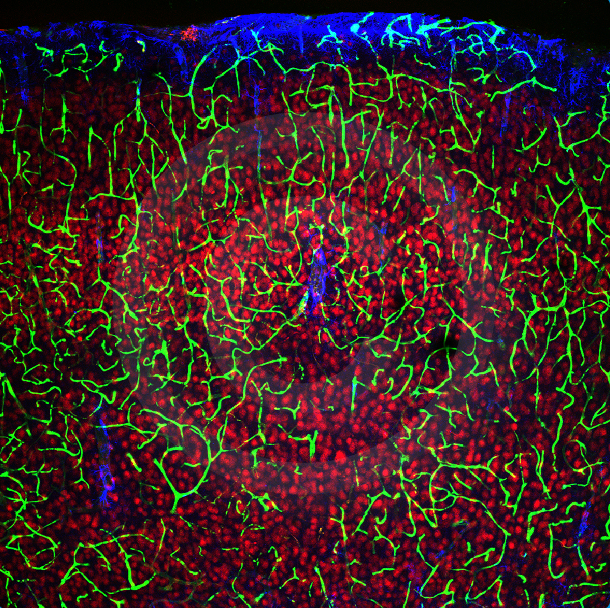 Reelin is an extracellular matrix protein that regulates neuronal migration in laminated structures of the developing brain. Its expression continues in the adult brain and Reelin has been shown to play important roles in processes independent of neuronal migration, such as synaptic plasticity and dendritic spine development. In the developing brain, Reelin exerts its function in guiding neurons to their final positions by binding to its receptors ApoER2 and VLDLR. Upon binding, the intracellular adaptor protein Dab1 is phosphorylated, resulting in cytoskeletal reorganization. We could show that ephrinBs are essential for Dab1 phosphorylation and Reelin signaling. As a consequence, mice lacking the three ephrinB ligands phenocopy several aspects of the Reeler mouse (Senturk et al., 2011). Now we are investigating the molecular mechanisms by which ephrinBs, Reelin, and other molecules involved in the signaling pathway regulate tangential migration of interneurons, AMPA receptor trafficking, synaptic plasticity and dendritic spine development. 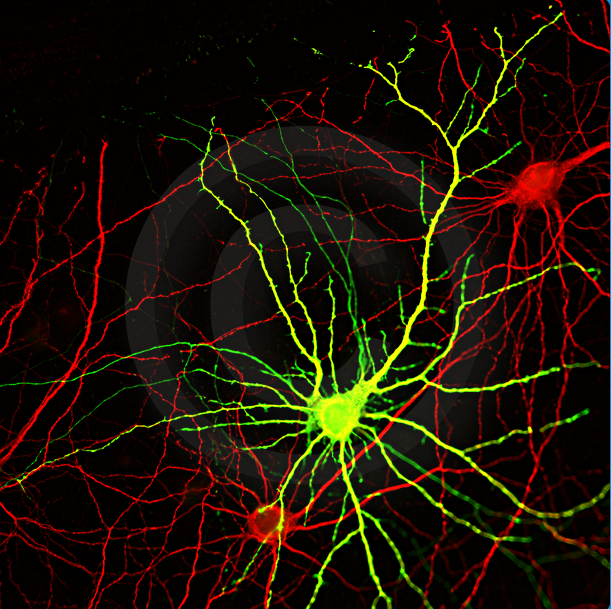 The mammalian brain contains two major regions, which preserve the capacity of neuron generation throughout lifetime - the subependymal zone at the lateral ventricles and the subgranular layer in the hippocampus. In these precisely defined neural stem cell niches young neurons are generated and migrate towards their target regions, where they integrate into pre-existing neuronal networks. Understanding the molecular mechanisms of adult neurogenesis, how various cues actually control neurogenic events like proliferation, migration and differentiation, yields high potential for therapeutic drug development in neurodegenerative diseases. Two groups of cell surface molecules have been implicated in adult neurogenesis: the ephrin family and their Eph receptors. EphrinBs are transmembrane molecules that bind Eph receptors on opposing cell membranes, thereby initiating bidirectional signalling within both neighbouring cells. The ability of bidirectional signalling places the EphB-ephrinB system in a variety of dynamic biological processes including cell segregation, spatial organization, cell migration, axon guidance and synaptogenesis during development and plasticity. A number of studies indicate that the Eph/ephrin system is involved in proliferation, stem cell maintenance and neuronal fate specification. Some of them also mention a possible contribution of the Eph/ephrin system in the control of migration during adult neurogenesis - an aspect, which up to now lacks a detailed characterisation of molecular mechanisms. Moreover, vessels have been shown to form scaffolds for neuronal migration in the rostral migratory stream. Here we aim to define the functional role of ephrinB-induced signalling mechanisms in the control of neuronal migration during adult neurogenesis and, since both, endothelial as well as the neurogenic niche cells express the EphB/ephrinB system, we analyse the molecular crosstalk between both systems during neurogenic processes. 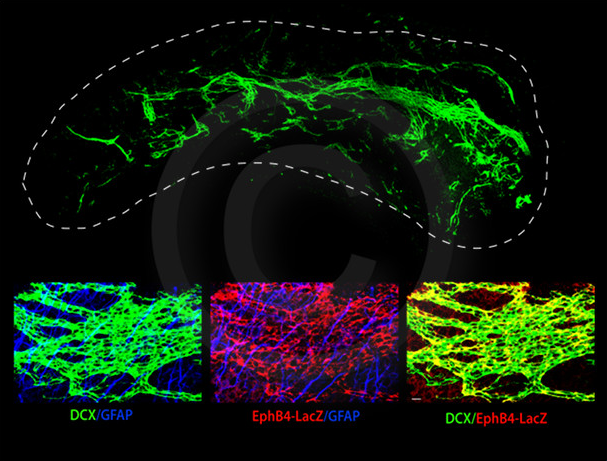