How do neurons and blood vessels “talk” to each other?

May 2015. Neurons and blood vessels often traverse the body side by side, a fact observed as early as the 16th century by the Flemish anatomist Andreas Vesalius. Only over the last ten years, however, researchers have discovered that the growth of neuronal and vascular networks is controlled by the same molecules. Amparo Acker-Palmer, a pioneer in this area, performs groundbreaking research on the communication between neurons and blood vessel cells in the brain. She hopes to use her findings to gain important insights into brain diseases such as dementia and mental illness. The European Research Council will fund her project with an Advanced Investigator Grant of 2.5 million euros over the next five years.

“Most interesting is the interaction between neurons and blood vessels in the cerebral cortex. To date, we know very little about how neurons communicate with endothelial cells in order to structure a functional network in the brain.” explains Acker-Palmer. She plans to assess these processes in the layering of the cerebral cortex during embryonic development. Here, neuronal cells migrate in an inside out manner, while blood vessels grow in the opposite direction, from the pial surface towards the ventricular surface. Since these two growth processes are coordinated, Acker-Palmer suspects that they are controlled by the same signaling molecules. How dysfunction in the crosstalk may lead to cognitive impairments is one of the foci of her research.

As model organisms her team uses genetically altered mice and zebrafish. Translucent zebrafish are a very good vertebrate model system to visualize in vivo the dynamic events of cell-to-cell communication at the neurovascular interface. High-resolution electron microscopes will also be used to study these close connections between endothelial cells in the blood capillaries and glial cells at the blood-brain barrier. Glial cells wrap around the blood capillaries and prevent harmful substances from the blood stream from entering the brain. Acker-Palmer and her team aim at deciphering the molecular signaling pathways regulating the neurovascular interface. “If we can intervene in the mechanism and temporarily open the blood-brain barrier, we can insert active agents and find new approaches for treating dementia and mental illness,” says the neurobiologist.

Amparo Acker-Palmer, born in Sueca, Valencia, Spain in 1968, studied biology and biochemistry at the University of Valencia, where she obtained her PhD in 1996. Then she moved to the European Molecular Biology Laboratory (EMBL) in Heidelberg to perform her postdoctoral work. In 2001, she moved to Martinsried, near Munich, to head an independent junior research group on signal transduction at the Max Planck Institute for Neurobiology. In 2007, she moved to Frankfurt to take up a CEF professorship at the Goethe University. Since 2011 Acker-Palmer is Chair of the Molecular and Cellular Neurobiology Department at the Goethe University. She received a Gutenberg Research College (GRC) fellowship from Johannes Gutenberg University Mainz in 2012, and she one of the leading scientists in the Rhine-Main Neuroscience Network (rmn2). In 2014, Acker-Palmer joined the Max Planck Society as Max Planck Fellow at the MPI for Brain Research in Frankfurt. Amparo Acker-Palmer is member of the Leopoldina German Academy of Natural Scientists and the Academia Europaea. She received the Paul Ehrlich Award for Young Scientists in 2010. 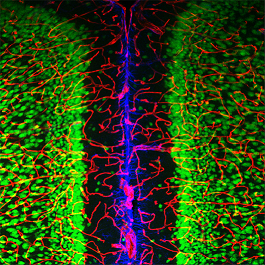 The microscope image of a mouse brain illustrates the close interaction between neurons (green), astrocytes (blue), and blood vessels (red) in the brain. The various cell populations appear in a specific pattern and interact with the neighboring cells.

Body of a three-day-old zebrafish larva. The blood vessels are shown in green, and the blood cells are red.